The kneading of the sourdough at 20 min interval for so many time is alway the most time-consuming and annoying part (I get flour and dough everywhere in the kitchen). I had heard about no knead technique, but I had a slight suspicion that it was mostly to make pun-ny book titles like “kneadlessly simple” and the title to this post. It is also the least used methods in sourdough recipes that I have seen. Although it’s a great for people who dont have a proofing basket as you don’t need one for this no knead recipe as the dough rises in a mixing bowl.

The biggest contention with no knead is the flavour. Many argue that it doesn’t taste as good, as the flavour has less depth. I slightly agree with that the no knead method did not taste bad but it was different, a bit more like normal white bread…. Here is a post that argues why kneaded bread is better not only because of the taste but other points I hadn’t thought about. I think though it is mostly comes down to personal preference. I am definitely going to try some more no knead breads.

The best book for the no knead method is My Bread: The Revolutionary No-Work, No-Knead Method by Jim Lahey and Rick Flaste. Also for a bit more science and why the no knead method works a post can be found at serious eat. Or also on here, Bodnant welsh food website, which also did two loaves to compare kneading vs no knead. Basically, the dough as it rises kneads itself. Also what is crucial is that you use a dutch oven.

But it actually works! You don’t need to knead! I used the New York Times recipe and to see if it made any difference as a comparison I also made my workhorse loaf recipe which is very similar. I made two different loaves with my workhorse recipe and kneaded them to different degrees. I kneaded one loaf with 20 min  4 times and another 8 times. The best result was kneading it 4 times at 20 min intervals (which is what the standard practice seems to be in most recipes). Kneading it 8 times did not make any difference to the loaf compared to kneading it 4 times.

Here are the loaves just out of the oven 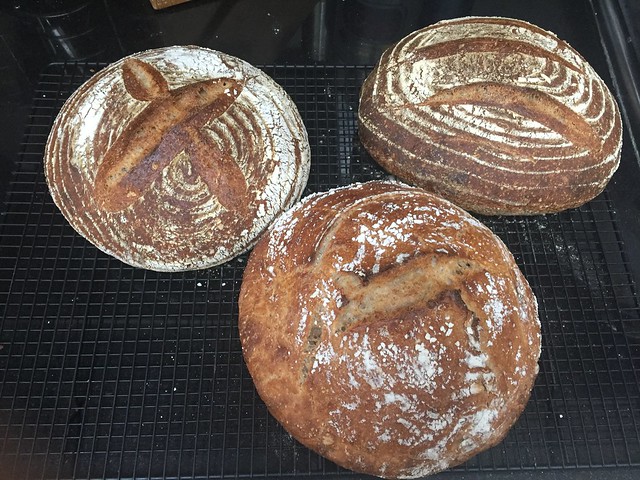 The left is 4 times, the bottom middle is no knead and the right is 8 times 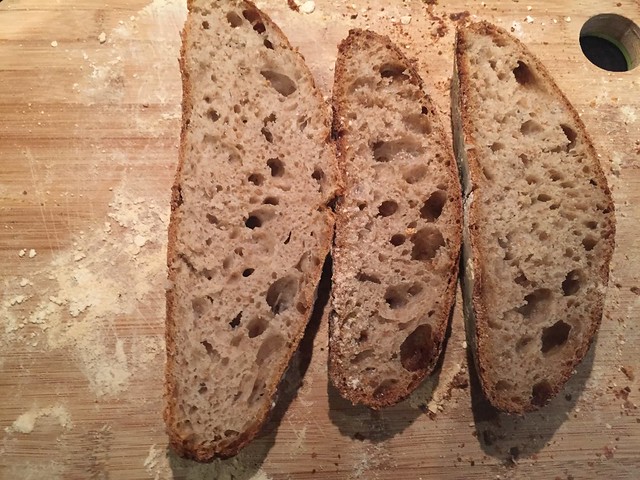 here is an intersection of all three of the loaves. Can you tell which is which?

A couple thing I have discovered and have started to do is: one dissolve the salt in 15grams of water from the recipe and dissolving the starter in the water before adding it to the flour which makes everything easier to mix. I also have started using plastic bags to cover the dough while its rising which is really good to prevent the bread from drying out. After shaping  I have also started to twist the bread on itself on to close the seems on the bottom.

More Photos
Back to top